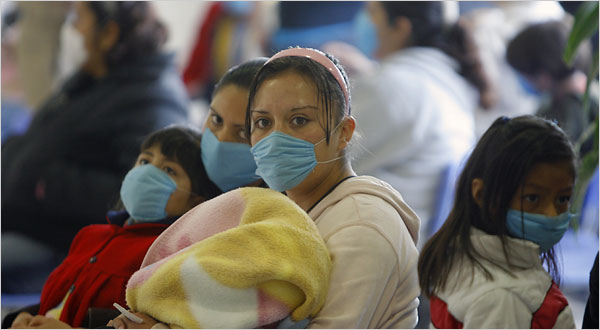 People awaited care at a Mexico City hospital Wednesday. A Mexican child was the first death from swine flu in the United States. Close 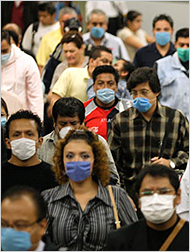 Commuters wore protective masks at a subway station in Mexico City on Wednesday.

Phase 5 had never been declared since the warning system was introduced in 2005 in response to the avian influenza crisis. Phase 6 means a pandemic is under way.

The health organization said its decision was based on the continuing spread of swine flu in the United States and Mexico, particularly the increasing numbers of unexplained cases among people not exposed to travelers or to institutions like schools or hospitals where many people have close contact with one another and high rates of transmission might be expected.

“All countries should immediately activate their pandemic preparedness plans,” Dr. Margaret Chan, director general of the organization, said at a news conference in Geneva. “Countries should remain on high alert for unusual outbreaks of influenza-like illness and severe pneumonia.”

The first death from swine flu in this country — of a 23-month-old child from Mexico who was being treated in Houston — was reported on Wednesday, along with more infections and hospitalizations.

The Centers for Disease Control and Prevention reported 91 confirmed cases from 10 states, up from 64 cases in 5 states on Tuesday.

Dr. Chan emphasized the need for calm, but at times spoke as if a pandemic had already begun, saying, for instance, “W.H.O. will be tracking the pandemic.” She also emphasized that developing countries tended to have more severe flu epidemics than rich ones, and said her organization and others would need to make special efforts to help poorer nations.

She called for global solidarity, saying, “After all, it really is all of humanity that is under threat during a pandemic.”

President Obama, terming the outbreak “cause for deep concern but not panic,” took the unusual step of using a prime-time televised news conference, convened to mark his 100th day in office, to deliver a public health message to the American people.

“Wash your hands when you shake hands, cover your mouth when you cough,” he said from the East Room of the White House. “It sounds trivial, but it makes a huge difference. If you are sick, stay home. If your child is sick, take them out of school. If you are feeling certain flu symptoms, don’t get on an airplane.”

With public health officials recommending that schools close if there are more confirmed or suspected cases, Mr. Obama urged parents and businesses to “think about contingency plans” in case of such closings.

He said he was calling on Congress to authorize an immediate $1.5 billion to “support our ability to monitor and track this virus” and to build the supply of antiviral drugs.

“The more recent illnesses and the reported death suggest that a pattern of more severe illness associated with this virus may be emerging in the U.S.,” the C.D.C. said on its Web site. More hospitalizations and deaths are expected, the site said, because the virus is new and most people have no immunity to it.

Dr. Chan said that government preparedness plans could include steps like ensuring that laboratories can test for the disease and that health systems can identify and treat cases, track an outbreak and prevent the virus from spreading in hospitals and clinics. She said governments should also decide on measures like closing schools and discouraging or banning public gatherings.

Mexico, for instance, has prohibited people from eating in restaurants and ordered most stores and other businesses to close for several days starting Friday, a move apparently intended to keep people at home during what is traditionally a long holiday weekend.

At a news conference in Mexico City on Wednesday night, Mexico’s secretary of health, José Ángel Córdova, also announced that the national government would close all but essential offices during the same time period. The government did not suspend mass transportation or close airports and asked that supermarkets and pharmacies remain open.

In the United States, Dr. Anthony S. Fauci, director of the National Institute of Allergy and Infectious Diseases, said the outbreak had caused such concern because officials had never seen this particular strain of the flu passing among humans.

“There is no background immunity in the population, and it is spreading from human to human — all of which has the potential for a pandemic,” Dr. Fauci said.

Dr. Richard Besser, acting director of the Centers for Disease Control and Prevention, said that officials had no way of predicting whether the outbreak would become more serious.

“You don’t know if this is a virus that will fizzle in a couple of weeks or one that will become more or less virulent or severe in the diseases it causes,” Dr. Besser said.

He said officials must follow government plans for a pandemic because of that unpredictability.

“If we could see into the future, it would be wonderful so that we could tailor all our responses specifically to what is occurring,” Dr. Besser said.

The disease centers’ count of 91 confirmed cases in the United States did not include some later reports by states that confirmed cases after the C.D.C. tally was posted. In addition, there were suspected cases in Louisiana and Delaware. Kits being provided to the states and other countries will allow them to test for the virus on their own and obtain results within a few hours. 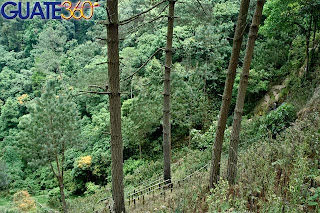 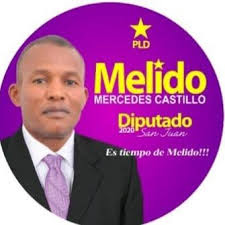